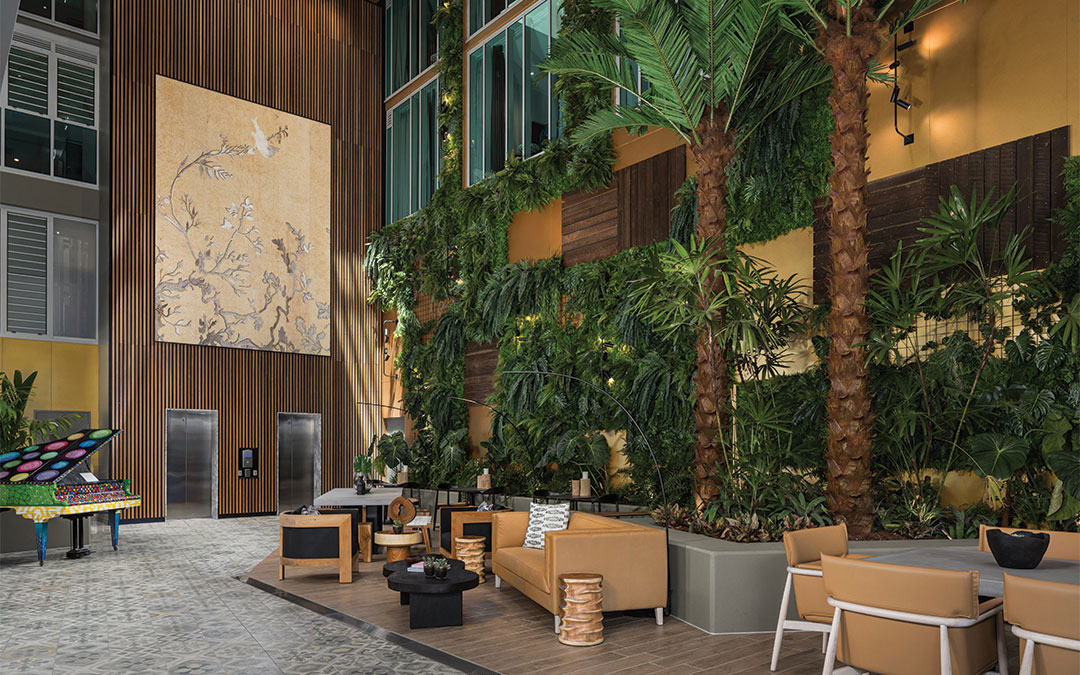 Queensland’s tropical north attracts millions of visitors each year thanks to its warm weather, reef, rainforest and outback offering, and Cairns has long been regarded as a must-see destination for both domestic and international tourists alike.
Presenting a laid-back city atmosphere, Cairns is the gateway to iconic Queensland treasures, such as the Great Barrier Reef and Wet Tropics World Heritage Rainforest, promising visitors an enviable tropical escape.

Being a town that thrives heavily on tourism, Cairns attracted the attention of international conglomerate, Ghassan Aboud Group who’s hospitality line, the Crystalbrook Collection, released its second installment for the Cairns region in November last year with its hotel, Bailey.

Having reimagined the typical hotel experience, Crystalbrook has rejected traditional and predictable hotel encounters and replaced them with a modern, innovative experience that shares an appreciation for the arts, originality and individuality.

Crystalbrook Collection General and Area Manager, Joel Gordon said this hotel was all about celebrating art and bringing together a culture of art.

“Bailey is the second installment of our journey up here in Cairns and we opened that hotel on the November 2nd last year, so it’s still relatively fresh,” Mr Gordon explained.

“We’re going into our fifth month of trade now which is great. We aim to showcase each property as having a personality. Our first hotel here, Riley, was that older sibling, the more responsible one, with the sophisticated lifestyle, living in the moment type character whereas, Bailey is the middle child; the thoughtful, arty one, and this personality was a bit of an over thinker.

“Bailey is the personality who would love to be seen at farmers markets rather than large supermarket chains, who likes to explore and celebrate local art and culture, and be able to support local artists as well.

“When we think of art we tend to think about painting and drawing, we tend to disregard those art forms such as makeup and tattoo artistry or poetry, so this brand was all about celebrating art in all its forms.”

To embrace all art forms, Bailey has dedicated art displays on each floor of the hotel offering a mix of works from local artists and Tafe students.

From the moment you walk into the lobby, Bailey offers a visual masterpiece that treats all the senses. From the lush vertical garden, high timber ceilings and glistening feature tiles, everything is a feast for the eyes.

“I often ask ‘what does five-star mean to you?’ because people’s interpretation of what five star is is always different. Before I ask this question, I felt I had to have an answer myself and this is something I’ve pushed through Riley and Bailey in its pre-opening phase, and something I continue to do, is playing on the five senses - what do you see, hear, feel, touch and smell. Because for me, if you can hit all five senses with an item that is going to draw people’s attention, then I think that is what a true five-star experience really is, ” Mr Gordon explained.

“At Bailey, when you walk in there is a mosaic called Dolly Dugong, which it’s an art piece of about 500,000 pieces made by Syrian refugees in Turkey. It was shipped across in 20 different pieces and put together like a jigsaw puzzle on this wall at Bailey and weighs five tonne, it’s just a really great piece.

“And there is another piece at the end of the lobby as well just above the elevators and another piece that is done by a local designer around the Great Barrier Reef, and it’s items that have been found by the sea and has been put together as a sea turtle.

“Bailey has a scent throughout the hotel, and there is our lobby playlist which was also sourced off the back of the Cairns Indigeonous Art Fair (CIAF), they do a fashion show every year and as I was sitting there as the designers modelled their clothes last year, the accompanying sounds emanated with me, so the music we have in the lobby was curated by the music director at CIAF,” Mr Gordon explained.

Supporting the local community by including local artists’ work from all art forms throughout the hotel is just one aspect of Bailey’s social awareness concept. In addition to this, sustainability plays an imperative role in the branding of Crystalbrook Collection hotels and forms part of the company’s core values.

At Bailey, when you walk in there is a mosaic called Dolly Dugong, which is an art piece of about 500,000 pieces made by Syrian refugees in Turkey. It was shipped across in 20 different pieces and put together like a jigsaw puzzle on this wall at Bailey and weighs five tonne, it’s just a really great piece.

“There are two items that form our core values: sustainability and connectivity,” Mr Gordon explained.
“Our sustainability, is really represented by a hashtag which is #responsibleluxury and we attempt to try and push that hashtag onto anyone who comes to stay at our hotels, because it’s what we feel our hotel brand represents in our quest for ongoing commitment for sustainability,” he said.
“We’re not saying we’re the poster child for sustainability, but we are saying we’re doing a lot more than others and hang our hat on always being at the forefront of luxury as well.
“We’re carrying that sustainability concept through all of our brands, for example we offer iPads in each of the rooms to eliminate paper, so we’ve taken out all the compendiums and room service menus and anything you can dog-ear, we’ve taken out.
“We’ve replaced all the 30ml amenity bottles and we’ve replaced them with our own branded Crystalbrook Immersion large pump solution. We have also replaced the old plastic room key cards with recycled wood key cards with artistic imagery on the side as well,” Mr Gordon added.

A typical hotel tour desk stocked with brochures for day tours and local sightseeing has been replaced with a digital tour desk, powered by three 43inch TVs which guests can self navigate through to select and book a tour.

Bailey has also adopted a complimentary valet parking for its guests who drive electric/hybrid and Tesla cars with electric chargers built into each of our hotels.
The art-inspired hotel offers 255 rooms in total, comprising hotel rooms, one, two and three-bedroom apartments which feature timber walls and panelling, bright, playful accents and modern bathrooms. There are several food and beverage offerings within the hotel, and continuing that sustainable ideology, 80 per cent of the hotel’s produce is sourced within a three hour radius.

The hotel sources its beef from Crystalbrook Pastoral located three hours west of Cairns at Crystalbrook station, and sister stations Silkwood Station and Menavale Station.
“We have 4,500 cattle, which are processed and brought down to us in Cairns and are part of our food and beverage offering such as Bailey’s CC’s Bar and Grill which is a true representation of that paddock-to-plate concept and a great representation of our commitment to sustainable farming and our own beef cattle,” Mr Gordon explained.
“We have a dry aged fridge at CC’s, which is becoming quite popular, and we also have 180 red wines to complement that style of dining.

“We also wanted to bring the farm to the table as well, so we have individual wood pieces that the cutlery sits on, sourced locally from the farm with our cattle branding and we wanted to have an immersive experience in that restaurant and bring a sense of upmarket dining to Cairns,” Mr Gordon said.
He explained that excellent, upmarket dining experiences were hard to come by in Cairns and recognised a gap in the market for this and thus an opportunity to bring something special to Bailey and Cairns as a whole.
“Our second restaurant offering is Pachamama, it means Mother Earth and is a rooftop dining experience. There is a pool up there with a bar and a sit down restaurant that has Latin American flavours.
“I’m pretty passionate that our restaurants actually represent an experience that people can walk away with and talk about with their friends.”

Crystalbrook Collection hotels prides itself on offering its guests an experience, a destination and memories that can be cherished. Offering a visual smorgasbord, Bailey has set the bar high with its sustainable and socially aware ethos while also offering a luxury five-star service. 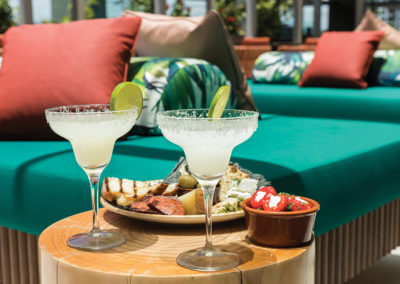 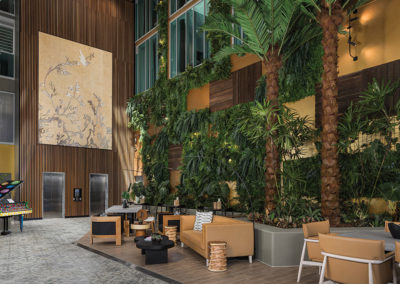 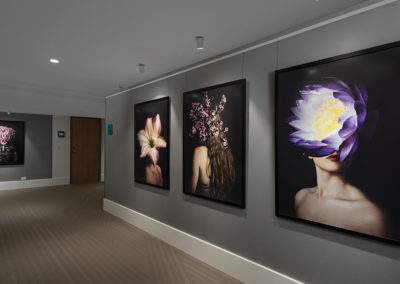 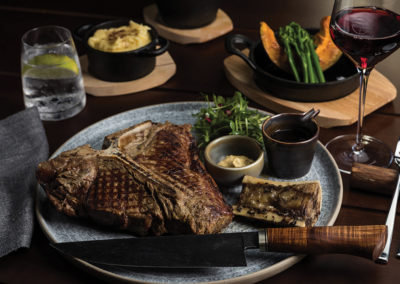 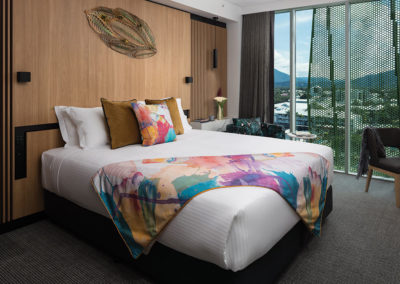 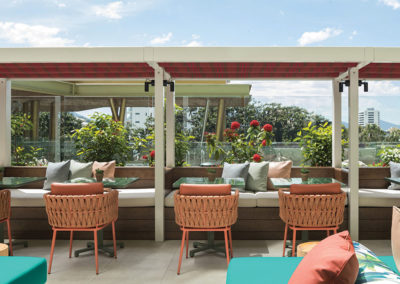