North Queensland pubs continue to be the state’s Keno hot spots with a Charters Towers man winning more than $1.5 million at Townsville’s The Sun Hotel.

The North Queenslander won the jackpot on Thursday 6 August 2020 but only claimed his $1,594,938 prize over the weekend after his sister saw on Facebook that it hadn’t yet been claimed.

The Sun Hotel Assistant Manager Sharna Paterson said she was thrilled to hear the winner had come forward.

“We’re so happy to hear this man has discovered his prize,” Paterson said. “It’s great news, not just for the venue, but also the region. Congratulations to our winner!”

The win follows another Townsville jackpot of close to $90,000 at the Dalrymple Hotel on 11 July and a $56,000 jackpot won by a Cloncurry man at the town’s Central Hotel on 18 July.

This latest 10-number jackpot locks in North Queensland as the golden Keno region, after Cairns had no less than three 10 Spot wins at three different venues collectively worth more than $8.6 million in 2019.

The winner, who bought the ticket while waiting during doing some errands in Townsville has since returned to work and says he’ll need to take some time to think through how he imagined life as a millionaire.

“I don’t know what I’ll do with the prize just yet,” he said. “It will change my life massively, there’s no doubt about that.

“I’ll certainly keep working but I think I’ll have to take some time off work to celebrate. I can’t stop smiling. It’s just incredible.” 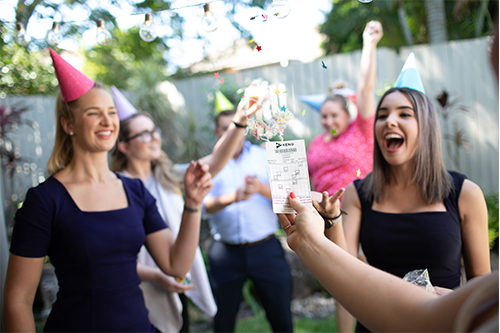