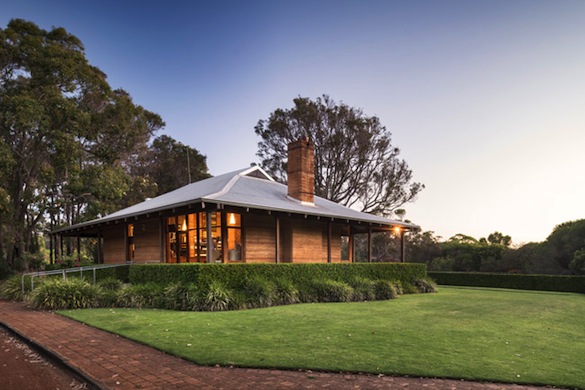 Queen Victoria granted John Septimus Roe, Western Australia’s first Surveyor General, 3000 acres of land on the riverbanks at West Swan in honour of his 57 years of service to the Commonwealth.

He named the property Sandalford after a priory in England’s Berkshire, his original home.  Sandalford eventually passed to John Frederick Roe, who took a keen interest in the fertile lands of the estate.  The property hummed to seasonal rhythms.

Stone-fruit picking was followed by harvesting grapes until late autumn when the currants, sultanas and raisins were dried on wire-netting racks and the yearly task of seducing the soil into producing the next crop began all over.

John Septimus experimented with many varieties of table grapes that found their way to the new colony.  The bunches of wine grapes were left on the vines until a test revealed they had reached their desired sugar content.  The grapes were transferred — by horse, lorry, and later a very impressive Chevrolet truck — to the nearby winery where generations of the Roe family oversaw pressing and bottling.

The estate flourished and wines produced from its vines satisfied the requirements of the local community and indeed further afield as the region’s reputation grew.  The winemaker at Sandalford Wines from the mid 1960s to the late 1970s was Dorham Mann — son of famed wine-making pioneer Jack Mann.

Under Dorham’s advice, the Roe family evaluated expanding into the Margaret River region in the state’s extreme south-west.  This area had earlier been assessed by University of WA viticultural scientist Dr John Gladstones as being an ideal climate and terroir for growing premium wine grapes, with its general conditions likened to the famed region of Bordeaux in France.

Based on this, the Roe family purchased a 300-hectare property at Wilyabrup, planted vines in 1970, and joined a handful of others in pioneering Western Australia’s second classic wine region — a destination now recognised on the world stage.

And the rest is modern history.

NOTE: Potential travellers should check the status of individual events and establishments with regard to the coronavirus outbreak.

Margaret River chardonnay at its best, laden with top fruit and the finest French oak. The palate is full of stonefruit and features intensity and layers of creamy complexity, balanced by excellent acidity. Drink with richly sauced pork or seafood.

Once Red Velvet had been successfully pinned down, it was only a matter a time before bubbles were added. The result is a sweetish, but not all cloying, glass of refreshing fizz that can be enjoyed as an aperitif but will also sit well with lighter Asian-style dishes.

It’s probably the wrong time of year to be writing about this fresh, crisp wine but I just can’t resist this dry glass of strawberry flavour which sits with so much of the cuisine we enjoy. Try it with seafood salad