On 20 May 2020, the Federal Court released its decision in WorkPac Pty Ltd v Rossato [2020] FCAFC 84. The decision, which is over 260 pages long, confirmed the court’s view that casual employees who work regular and systematic hours with a “firm advance commitment” of work are more likely considered permanent employees, rather than casual.

It also reached this conclusion despite the employee in this case, Mr Rossato, being contractually classified as a casual employee and paid a casual loading.

Between 2014 and 2018, Mr Rossato was engaged by WorkPac, a labour hire company, to work for Glencore in one of its Queensland coalmines.

Over the course of 4 years, Mr Rossato was issued with six separate and consecutive employment contracts. During each period of engagement, Mr Rossato was engaged as a casual “Field Team Member”.

In 2018, following his retirement, and relying on the decision in WorkPac v Skene1; a significant decision involving his former employer where the Federal Court found that Skene was not a casual employee for the purposes of being entitled to leave entitlements, despite being engaged and paid as one, Rossato wrote to WorkPac claiming he was entitled to payment of his certain leave entitlements.

Refer below and click on the QHA’s article that appeared in the November 2018 QHA Review. 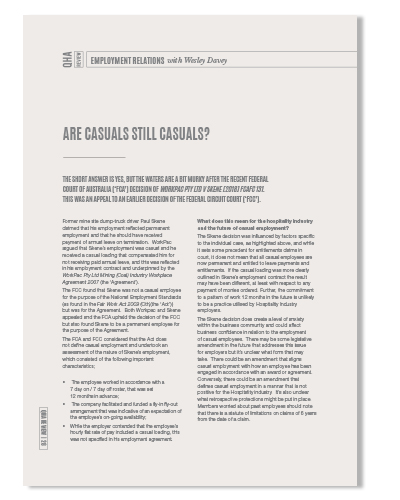 As referred to above, the Federal Court found that having regard to all of the circumstances of Mr Rossato’s employment, his employment was regular, systematic and with a firm advance commitment of work.

Justices Bromberg, White and Wheelahan, in their judgement considered, in detail, the legislative framework regarding causal employment in Australia and re-affirmed the submission in Skene: “the indicia of causal employment referred to in the authorities [being] irregular work patterns, uncertainty, discontinuity, intermittency of work and unpredictability – are the usual manifestations of an absence of a firm advance of commitment”.

Further, the Court submitted that that the description parties use to categorise their employment relationship ie stating an employee is casual is an employment contract, is not determinative nor conclusive of the entirety of the employment arrangement: “the assessment of whether a person is a “casual employee” is to be conducted by a characterisation of all of the relevant facts which speak to the type of employment that existed at the time the entitlements in question accrued.”

Their Honours then turned their attention to how Mr Rossato worked under his 6 various contracts, specifically: working predictable and systematic rosters which operated on a 7 days on/7 day off basis, with some rosters being set some 12 months in advance. The Court was critical of this and noted this conduct was indicative of a “firm advance commitment” between the parties to be engaged on an “on-going” indefinite employment rather than a casual one.

In conclusion, their Honours “found that Mr Rossato was not a casual FTM [Field Team Member] under the [Agreement], noting that the circumstances of his employment could not be distinguished in a material way from those of Skene”.

Both parties have been given until 3 June 2020 to confer and file proposed orders and declarations, with any reply for the Court to consider. At this time of writing this article, no information arising from the 3 June timeframe has been released.

The Federal Attorney General and Minister of Industrial Relations said “what appears fairly obvious on the face of the decision is that it has immediate practical implications for the bottom line of many Australian businesses at a time when so many have taken a huge hit from the COVID-19 pandemic.”

It is not clear whether WorkPac intend to appeal the decision.

The AHA, our national body, in conjunction with relevant stakeholders and other industry associations will work closely with government to work towards a favourable outcome for our industry.

In the meantime, members with concerns about what this could mean for long term regular casual employees with a firm advance commitment of employment are encouraged to contact the Employment Relations team.

Please note that the decision in this case does not automatically mean that every casual employee is entitled to paid leave – an employee would need to make a claim, and the relevant court would consider the circumstances of the case in making any decision regarding entitlements. The case does, however, provide strong guidance on the position a court would take if the circumstances were similar.

Advice given at the time of reporting on the Skene decision in the November 2018 edition of QHA Review is still relevant. It was:

While it’s easy to implement this for new employees, for existing employees, any amendments to a contract require that employee’s agreement. For many existing casual employees, they may welcome an offer of permanent employment, due to e.g. enhanced ability to obtain finance with banks, regularity of hours, etc.

The QHA can assist you with your employment contract needs. Call us today to discuss set-off clauses and our template contacts for both award covered, as based on the Hospitality Industry (General) Award 2020, and (genuinely) award free positions.